The One UI 2.0 Beta program for Galaxy s10, S10 Plus and Galaxy s10e is set to be released this month. Users can enroll in beta program and can have a pre release of the All one One UI 2.0. As you know that Samsung replace its old UI with completely revamped One UI. Which was one of the best software improvements. One UI was focused on providing the ease of use for big screen phones.

So, No Android 10 with One UI 2.0 Beta is currently confirmed for Galaxy 10 line of series. Note 10 and Note 10+ is not yet available in this beta program. But they wil surely get the proper OTA updates once the software is out of beta phase. Here are all the Android 10 One UI 2.0 Features on Galaxy S10

Currently the One UI 2.0 was to be available to South Korea, but recent news says that the beta program would be coming to the US also.

More information for the US One UI 2.0 beta. pic.twitter.com/k1p45RmYSS

Galaxy S10 5G was found no where in the mentioned beta program so for now we thing its excluded. 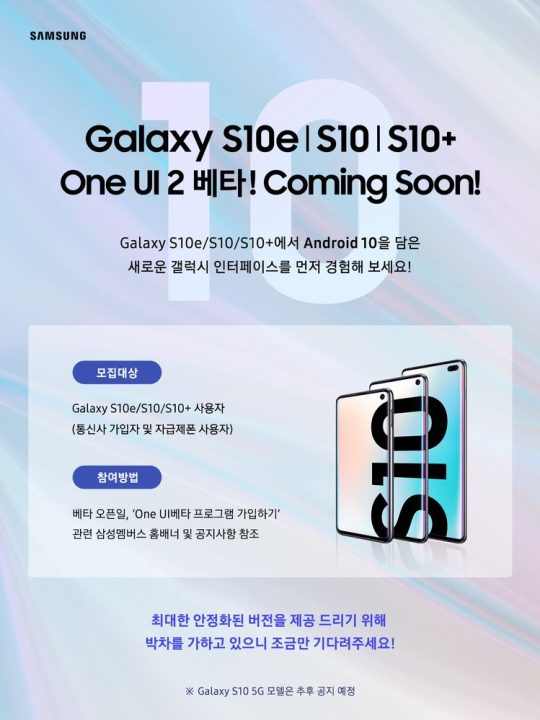 How to Get Enrolled In Android 10 One UI 2.0 Beta Program

To get enrolled in the one ui 2.0 beta for Galaxy s10. You have to register on Samsung Memebers app. Once the One UI 2.0 beta is released, you will receive an OTA update.

Note: Not all users would be able to enroll in this beta program because there are limited seats. So, first comes first serve.

For now we are not sure that what One Ui 2.0 will bring, but once we get our hands on it, we will turn it upside down and let you know that what new features, improvements are done.

What I think is there won’t be much big of a change, minor changes, improvements and some one or few more new features would be introduced. Share this news and be the first to enroll in the beta program. Subscribe for more latest news and tutorials.